MPG 2012 Chicago is complete. Check out a full listing of all of our local meet ups here.

“It is inspiring to know that there is a support group for someone on the verge of a career break – or for someone who finds the mere thought of long term travel appealing.”
– 2011 Attendee 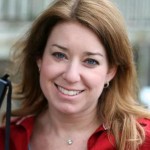 Lisa Lubin is a three-time Emmy® Award winning television writer, producer/director, photographer, and video consultant. After more than a decade in broadcast television she decided to take a sabbatical of sorts which turned into nearly three years traveling and working her way around the world…solo. She’s been on six continents and in 45+ countries. She took Spanish and surfing lessons in Costa Rica, rode through the narrow fjords of Chilean Patagonia, hiked up a snowy volcano in Ecuador, swam with dolphins off the coast of New Zealand, climbed high atop the Harbour Bridge in Sydney, sand-boarded the dunes of Dubai, kayaked between pristine islands of Belize, served up coffee and sandwiches in a café in Melbourne, taught private business English lessons in Istanbul, was a pet sitter and an ‘extra’ in Los Angeles, did public relations in Madrid, climbed like Moses to the top of Mt. Sinai, and successfully accomplished a two-week bicycle tour through the rice fields Vietnam.

She documents her (mis)adventures on her blog with photographs and articles from the road/train/rickshaw/camel. Her writing and photography has been published by the Wall Street Journal, the Chicago Tribune, Smithsonian, Encyclopedia Britannica, and American Way Magazine. She also runs LLmedia, a video consulting business and wrote an eBook for bloggers and entrepreneurs on how to produce videos. Lisa loves cheese and kittens, but not together. 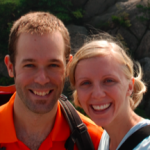 Bessie and Kyle Crum
Bessie and Kyle quit their jobs in Chicago in 2008 for a year long backpacking trip and a love of travel kept them away 4.5 years. They backpacked from Mexico to Argentina by land, volunteering over 1,000 hours in El Salvador and climbing lots of volcanoes. To keep funding their travels, they took jobs as English teachers in South Korea and began a few online projects and freelance IT work. After exploring southeast Asia and spending a few months in Chiang Mai, Thailand, they moved to Myanmar (Burma) to work with community education and manage volunteers through Teach for Myanmar. They resettled back in Chicago this past summer, and have become avid bicyclists and runners exploring Chicago’s neighborhoods. They’re currently doing travel inspired IT work with their company, which will no doubt fuel future travels. 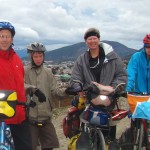 Nancy Sathre-Vogel and Family
The Vogel family has pursued their passion and followed their dreams quite literally to the ends of the earth. They’re most recent exploit was a three-year journey on bicycles that took them from Alaska to Argentina. Now they live in Boise, Idaho and are enjoying putting down roots and being part of a more stable community. They share their adventures at their website. 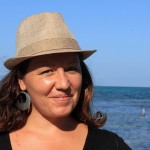 Jessica Ainlay
Jessica Ainlay is one half of the Globetrotter Girls, along with her partner in life and love Dani Heinrich. The American-German duo set off in April 2010 to travel the world and have since traveled extensively through Mexico, Central America, Europe, Canada, the U.S. and South East Asia. Together the girls run their travel blog, GlobetrotterGirls.com along with multiple projects brewing on the side – all while working as often as possible from a hammock. 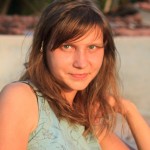 Val Bromann
Val got her passport when she turned 25 and soon after accompanied friends on a three-week trip around Europe. It was then that she heard of people taking round the world trips. Her first thought was: I could never do that. Five years later, Val quit her job as a web editor in Chicago, bought a one-way ticket to Europe, and has been traveling ever since. On the road since July 2011, highlights of her first year of travel include throwing tomatoes at La Tomatina, filming a Bollywood movie in India, watching competitive eating in Bangkok, learning to surf in Bali, and falling in love with too many guys (and countries) to count.

We are excited to have the following travel experts join us as well: 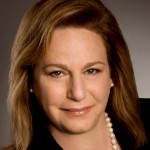 Lisa Dworkin: Founded and authored by beach-addict Lisa Dworkin, thebestbeach.net offers illuminating and honest information about beaches around the world. In fact, Lisa has devised her own rigorous beach checklist, personally used to grade and rate every beach featured on the website. Prior to living her dream visiting and writing about beaches, Lisa was a futures trader, science teacher, curriculum designer, and president of a non-profit organization.
Website: The Best Beach | Twitter: @thebestbeachnet | Facebook: The Best Beach FB page 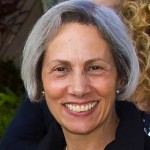 Ann Becker: Ann Becker has owned her consulting business for more than 35 years. Working predominantly with nonprofits and government agencies, she has guided her clients in program and organizational development, comprehensive meeting management, and strategy consulting. More recently, through her small group experiential travel adventures, Ann has combined her love of Costa Rica with her business expertise. Since 2006, she has visited Costa Rica more than 25 times and regularly leads an annual women’s adventure (February) and a co-ed Spanish/Cultural Immersion trip (April). In addition, Ann loves international travel with her husband; learning Spanish; bird watching; and family outings to cheer on the Chicago Cubs. She is diligently trying to master her Pilates short spine and cat stretch.
Website: International Experiential Travel | Twitter: @TravelwAnn | Facebook: Travel with Ann Costa Rica 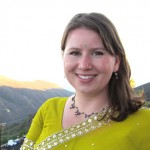 Megan Kearney: Megan got her first taste of international travel studying abroad. When she overslept on the morning of her first trip, missing her train and losing touch with her friends, she discovered the benefits of traveling alone. Since that fateful morning has completed two solo around-the-world trips, exploring 50 countries before she turned 30. Although hard to decide, she admits her favorite places were the Wakhan Corridor in Tajikistan, Myanmar and Southern Ethiopia. When she isn’t hiking up volcanoes in the D.R.C., sketching hieroglyphs in Egyptian tombs, surviving car crashes in Kyrgyzstan or paddling a dugout canoe in Madagascar she writes about her travels at Me-go.net. Since starting in 2003, she’s had the opportunity to help countless travelers with advice on planning their own trips. She currently spends her time exploring Chicago by bike while dreaming about her next trip.
Website: Me-go.net | Twitter: @me_go 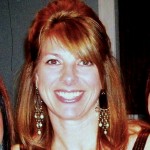 Leora Krause: After being downsized from Corporate America at the end of 2011, Leora Krause spent four months travelling through Southeast Asia. Her excursions took her to a Kung Fu camp in northern Thailand, an idyllic island retreat in Vietnam, a stint volunteering with Tibetan refugees in India, and culminated with a successful trek of the Annapurna Circuit in Nepal. She took her first career break in 2003, quitting her day job and travelling to Canada, Australia, New Zealand, Indonesia, and several European countries for six months. She has travelled to 28 countries and 44 states and has an ambitious goal to get to 50 countries and 50 states by the time she’s 50, but she won’t tell how soon that will be.
Website: Restless Passport

Elizabeth Rogers: Elizabeth first traveled around the world for almost a year with her husband Alex in 2006. They both quit their jobs, sold their apartment and furniture on Craig’s List and set off with a tent and their German Shepherd in the back of the car for several months of camping in the States, then onto Thai beaches full of poi spinners, long days at a silent meditation retreat, beautiful treks in the Himalaya, and endless cups of chai in Turkey. Upon returning to the States, Elizabeth went back to the same corporate job she left and spent a few years with her nose to the grindstone working and getting her MBA at Chicago Booth. But always one to make time for travel, between classes she spent last summer in a hilltop culinary retreat in Bali, eating chili crabs in Singapore and drinking endless warm beers on a tour through China with 12 Aussies. Elizabeth got involved with a start-up business when she returned to Chicago (because she can’t get enough of the unknown!) but is currently on the lookout for the next great adventure in life, work and travel!
Website: Alex and Elizabeth | Twitter: @ev_rogers 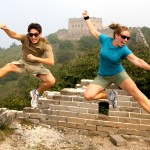 Christine & Mike Benson: Mike and Christine made the decision in 2007 to fulfill a long-time dream of traveling around the world. Newly married and broke, they had no choice but to wait and save save save. When they could hold it off no more, a departure date was set – a date that is etched in their minds as the start of their best adventure yet. Mike and Christine spent the next 11 months traveling to 18 countries spread across five continents. Their travels led them into the jungle and mountains of South America, on an African safari, through temples in Southeast Asia, in and around New Zealand while living out of a van, and more. The decision to embark on this journey will easily remain as one of the best decisions ever made. Both started new endeavors upon their return and Christine works as a teacher while Mike is a filmmaker.
Website: Checking Off Everywhere 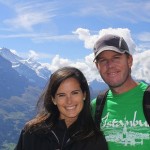 Ryan & Laura Keller: While they watched most of their friends idle away their 20’s climbing the corporate ladder, Laura and Ryan have spent most of theirs traveling the world. For this Chicago couple, travel wasn’t a dream; it was a necessity. Semesters abroad in Europe during their college days ignited an insatiable passion for travel but it was a year-long journey across South America that confirmed this wanderlust was here to stay. Dedicating three of the last 10 years to traversing the globe, their most recent adventure took them around the world on a 14-month odyssey spanning six continents. They recently added “Explorer” to their resumes and want to use MPG to encourage others to do the same.
Website: Round We Go | Twitter: @roundwego | Facebook: Round We Go on FB 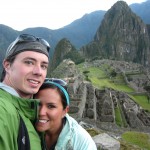 Kelly Cohn and Derek Nielsen: Derek and Kelly met on October 1st 2007 and have been together ever since. Now, several years later, they are both in their mid-twenties and have established, successful careers. Kelly is in the business, and Derek does athletic strength and conditioning. They both dream to see the world and share a passion for learning about different cultures, photography, music, art, and exploring. Derek and Kelly spent the first 6 months of 2012, from January-July, traveling and trekking throughout South America. They spent time throughout Chile, Argentina, Uruguay, Brazil, Bolivia, Peru, and Ecuador. Now that they have returned to Chicago, they are both interested in helping others take a career break of their own, since they found out just how easy it can be.
Website: Derek and Kelly & Derek Nielsen Photography 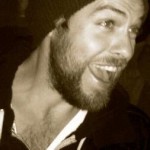 David Falsetti: In 2001, while studying abroad in Mexico, David Falsetti crossed paths with an inspiring guide that made him realize that his passion for travel could become a career. He spent the next 10 years ‘working’ in Canada, Alaska and the lower 48 in the summer, winters guiding in Central America and his vacation time crisscrossing the globe. Highlights include eating grasshopper salads in Oaxaca, smuggling people across borders and being cast as Santa Claus in a Taiwanese Christmas extravaganza. Currently he is the US Business Development Manager for Intrepid Travel.
Website: Intrepid Travel | Twitter: @Intrepid_Travel | Facebook: Intrepid Travel on FB