The movie release of Eat, Pray, Love is coming soon (August 13). And given the popularity of the book, we are sure that the movie (starring Julia Roberts) will be a hit as well and will likely inspire women across the globe to explore their own extended travel dreams.

And Meet, Plan, Go! is ready for them! Our goal is to connect global-minded women who have made successful travel breaks with women in various stages of career break contemplation. By doing so we will show them that storylines like Elizabeth Gilbert’s are possible and introduce would-be-travelers to women who were once just like them.

So who are some of these women you can meet in person? 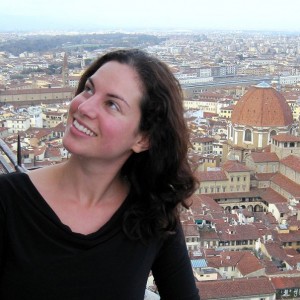 BOSTON HOST – Lillie Marshall began solo traveling during her college summers where she volunteered for five weeks at a preschool in London and three months in Mexico learning Spanish and volunteering in a rural village. Directly after college, Lillie entered the Boston Public Schools as a high school English teacher and proceeded to teach for six fascinating and mega-intense years.

Then in the summer of 2009, after much scheming and saving, Lillie took a Leave of Absence from teaching to circumnavigate the globe. For the next nine months, she had a truly wonderful time sightseeing in Japan and Southeast Asia, volunteer teaching in Ghana, and writing like crazy in Iberia. You can read about the whole adventure at AroundTheWorldL.

Lillie is currently back in her beloved hometown of Boston, crafting a career that combines teaching, writing, and travel… and helping guide great people like yourself to make their dreams a reality!

CHICAGO HOST – Lisa Lubin is a three-time Emmy-award-winning television writer/producer/editor.  After a thirteen-year career in broadcast television she decided to take a sabbatical of sorts, which turned into 3+ years traveling and working her way around the world. She has written about the (mis)adventures that ensued as she traipsed around the globe on her travel website, LLWorldTour, which has had hundreds of thousands of hits and subscribers from all over the world.

She is now back in Chicago working as a freelance television producer. She also lectures on traveling solo and has also teamed up with Whole Foods, REI, and Hostelling International for ‘Travel and Food’ seminars.

DALLAS HOST – Alisha Robertson’s passion for travel began on her first trip to Costa Rica and was solidified after spending a summer in Thailand post college. She spent the next four years in corporate America before leaving to teach Business ESL in northern Chile. She also spent time traveling through South America and worked with students and co-workers from England, India, China, Chile, Columbia, Argentina, Brazil, France, Peru, Bolivia, and Portugal.

Alisha is passionate about education involving social entrepreneurship, long term travel, volunteerism, and helping others learn about other cultures. She is in the process of launching Small World Pursuits – an educational blog about broadening horizons, traveling and working abroad, volunteering, and connecting with cultures from around the world.

NEW YORK CITY HOST – Sherry Ott is a refugee from corporate IT who is now a long term traveler, blogger and photographer. Sherry has been blogging about her travels on Ottsworld: Travel and Life Experiences of a Corporate America Runaway for 4 years. It was named one of the Best Around the World Travel Blogs on Boots n’All travel website. While on a career break she traveled around the world to over 23 countries primarily solo armed with her camera. She has spent the last year living and working in Vietnam experiencing the ups and downs of solo expat living in a very foreign culture.

Sherry has also partnered with Michaela Potter to co-found Briefcase to Backpack – a website which specializes in providing inspiration and advice for adults looking to take a traveling career break. 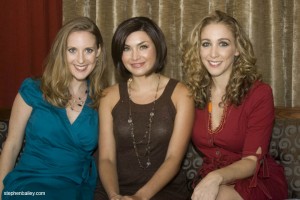 The Lost Girls – In June 2006 Jennifer Baggett, Holly Corbett and Amanda Pressner, three friends and media professionals, left their jobs, boyfriends, apartments and everything familiar behind in New York City to embark on a year-long search for adventure and inspiration. Journeying across four continents and more than a dozen countries, they shared their experiences with other aspiring vagabonds on their website, LostGirlsWorld.com. They turned their tales into a travel memoir, which hit shelves in May 2010. Read our review of The Lost Girls: Three Friends. Four Continents. One Unconventional Detour Around the World.

The Lost Girls will be participating in our New York City, Boston, and Philadelphia events.

Marie Elena Martinez is a solo adventurer who left a successful literary publicity job in 2005 for two extended years on the road. She has since parlayed her experiences into a freelance travel writing career, and believes that solo travel is a way to discover the world while simultaneously discovering one’s self. She has since written for such publications as Newsday, the Miami Herald and Women’s Adventure Magazine.

She lives in New York City where she is working on a travel memoir, loosely titled One Girl, Many Maps, Many Mishaps, that details her career break abroad in South America and Southeast Asia. This summer, her travels will take her to Africa where she will attempt to summit Mount Kilimanjaro for charity. Her adventures can be followed on her blog, Marie’s World.

Marie Elena will be participating in our New York City event. 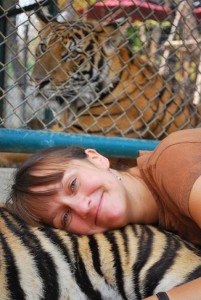 Pam Perry made a commitment in 1993, at the age of 23, to her boss that she would stay with the company for 15 years. Coincidentally, at the 14-year mark, she read Eat, Pray, Love and knew what her next steps would be – to travel. “My boss (who’s also my best friend) was with me when I finished the last page and she said ‘You want to go, don’t you?’. She KNEW that the book would have that kind of impact on me so she’d intentionally not lent me the book despite at least five requests to borrow it.”

Pam will be participating in our Seattle event.